This is a guest blog by a good friend of NBP, psychologist Karen Nixon. We hope it helps. 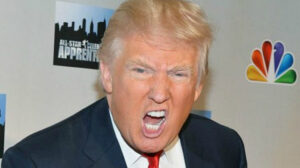 Yesterday I read how affected some of my Facebook friends are at what Trump is doing. I felt very disturbed, spending the day on the Internet reading the news and a lot of commentary. I started to see him more clearly and I wondered why he disturbed me so much.

I can see that he likes to create chaos. He has to be the big man and make big decisions, decisions that make a big statement about his power. He doesn’t care if his decisions are not thought out because the more he disturbs, the more people react and write about him, the more that proves his power. To him that is power. If there are any criticism of the consequences, well, those consequences are someone else’s fault, never his. He cannot and will not allow himself to feel any self-doubt. If he thought about his decisions before he made them, he would have to experience moments of doubt. He cannot afford that. Any self-doubt and the whole structure of Donald Trump that he has created is in danger of collapse.

His behaviour is all reactive and all designed (at some unconscious level) to keep others at bay, just like a cornered pack of wolves who howl, growl, bark and bare their teeth in self-protection.

Trump always feels cornered. Of course, the real enemy is inside him, but doesn’t know that because he never looks inside. He has actually admitted that he never reflects. Instead of reflecting and growing, he externalises his sense of persecution and creates outside enemies. One enemy is the press. The press are highly critical and he has not been able to silence them. Not yet anyway. The more they criticise and ‘corner’ him, the more chaotic he will become. And he will not care. He will run the ship onto the rocks and take the whole system down with him if he can. That just proves his power.

He and his cronies are full of hate and anger. They don’t care about anyone and their only purpose is power. They feel so powerless deep inside, their complete focus is more power, more winning, more careless action, more chaos.

Trump will not settle and govern. He is always at war. He creates war. People are on the streets protesting. If they get worn down and stop protesting, he will create other enemies to war with him. He HAS to be at war. You cannot keep winning without a battle. People who are as emotionally closed-down, numb and empty as Trump have to keep fighting. They feel dead otherwise. He will fight until his last breath and, even then, he will still be creating the crazy illusion that he is winning.

Here is the rub. We all have some Trump in us. If we really want to get rid of Trump we have to look inside and find our little ‘Trump.’ When we find it, we love it to make it better. We accept it because it is simply a protection strategy. Something disturbed us in our early life that we couldn’t deal with, so we shut it down. I found mine this morning, after a couple of days of obsessing over Trump and what he is doing.

Trump is just a mirror. We all created him and he is mirroring back at us our buried anger. It would be easy to believe that this doesn’t apply to us, and only applies to the people who voted for him. Sorry! But no. If you feel angry at what he is doing, you have a history, too, a history of feeling disempowered. After finding mine this morning, I can see what we need to do if we want to get rid of Trump. He is giving us the opportunity to root out any of our feelings of inadequacy and fear. I know that isn’t easy but it is the real hero’s journey (the one that Trump is avoiding). Find it, acknowledge it and release it and Trump’s power to disturb us will go. And if enough people do that, if enough people see the truth at that level of deep inner honesty, Trump will actually go. He has externalised his inner battle. Do you really want to do the same?